Latest ExTix: Lots of Flexibility and a Few Flaws

ExTiX 19.10, released with the LXQt desktop on Oct. 23, is a customized Linux distro that leaves you wanting more but settling for less.

ExTix is a lightweight modular Linux operating system that is part of the Exton Linux/Live Systems family of distributions hosted by The Swedish Linux Society. The Society hosts 16 Exton distributions.

The ExTix distro line, developed by Arne Exton, is perhaps the best known of Exton’s Linux platforms. However, the Exton Linux inventory of distributions is a fertile repository of custom distros you will not find elsewhere.

Exton Linux releases contain an assortment of customized Linux distros based on a wide family of options including Arch, Debian, Ubuntu, Puppy and Slackware. Multiple versions of these distros have an even wider range of desktops.

I have focused only on the LXQt edition of ExTix so far. At differing intervals in the developmental cycle, the developer releases three other ExTix customized desktop choices for ExTix: Budgie, Deepin and KDE.

Within the four ExTix options, you have an unusual lineup. The ExTix line is not a retread of other distros you may have tried running any of these desktops. The Exton Linux family offers many approaches to providing Linux workstations.

Each of these customized platforms is unique. No server platforms are in the mix. You will not find clones of other Linux distributions.

Approach your introduction to ExTix Linux with an open mind. ExTiX has several shortcomings that can make it a bit troublesome to use, but the releases are stable beyond a doubt.

This distro, built around the LXQt desktop, is definitely quirky in spots. The quirkiness is more due to the developer’s design than the result of instability. Still, the shortcomings in this distro can give new users a less-than-satisfying experience.

Developer Arne Exton created ExTiX and dubbed it “the ultimate Linux system.” It is an offshoot of his other Exton Linux/Live Systems.

Both the Exton and ExTiX OSes are linked to download ports on SourceForge.net. You can also download a variety of ExTix releases from The Swedish Linux Society’s server. This might be your best option as the ISO files are listed all in one place.

I reviewed ExTiX in 2015 after the developer yanked out GNOME and replaced it with the then-brand-new LXQt desktop. I again reviewed the ExTix LXQt desktop release last summer.

Different Under the Hood

ExTiX 19.10 LXQt DVD 64-bit is based on Debian and Ubuntu 19.10. This relatively new desktop environment is the product of merging the LXDE-Qt and the Razor-qt projects.

LXQt is actually the technical replacement of LXDE, the Lightweight X Desktop Environment. The difference between LXDE and LXQt is rooted in their separate toolkits. These are developer tools to draw app interfaces in a consistent way.

Toolkits provide a standardized way for developers to design and program toolbar buttons, dropdown menus and such, without starting from scratch for each app. Two Linux toolkits dominate that landscape: GTK+ and Qt.

LXDE uses GTK3 code that was revised in 2011. The LXDE maintainer released a port based on Qt code in 2013. Then other developers merged the Qt version of LXDE and the Razor-qt desktop interface to create LXQt.

The live session all-the-time feature is an inviting approach. Usually, Linux distros are distributed via downloaded ISO files that are used to sample a distro by running directly from a bootable DVD or USB storage medium. Most distros’ live session environments allow you to install a Linux system to a host computer’s hard drive. 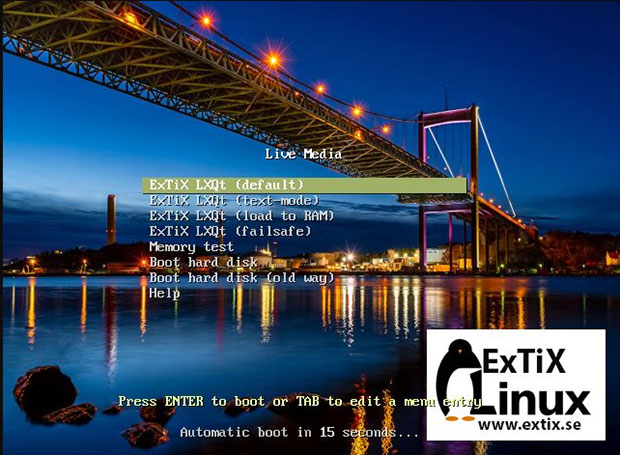 ExTix Linux is a customized Linux OS that retains a live session environment after installation.

Other live session installation features let you create a portable Linux system that boots a computer from a USB drive. This approach stores all configuration and file updates to the same storage medium using a feature called “persistent memory.”

ExTix builds on those methods. It provides an option to install the live session with configuration changes intact onto the hard drive. Plus, you can run ExTix from a USB thumb drive with persistent memory active.

ExTix is a lightweight distro in terms of how little it drains system resources. Running the live session from a hard drive is faster than running it from a DVD session. A USB-launched live session is somewhat speedier than a DVD launch.

Yet ExTix offers an even better running option. You can launch it via an option to transfer the system to the computer’s memory. Your system needs at least 2 GB of RAM for this to work.

This run-in-memory option, whether launched from hard drive or USB drive installation, gives you lightning-fast performance. If you use the USB installation, you also get the advantage of having a portable Linux OS that you can carry around in your pocket and run on any computer.

Sort of, that is. ExTix has some built-in design limitations to that portability. You can run the bootable DVD with any computer that is capable of booting from an optical drive — but not all new laptops come with built-in DVD drives these days. See more on this booting limitation below.

ExTix makes it somewhat easier to combine options without fussing with the awkward setup process to create persistent memory or having to settle for the plain vanilla default ISO contents.

Use the Refracta Snapshot tool found in the System Tools category of the main menu. First, launch the live session.

Then make all the configuration adjustments via the various system tools in the Preferences panel of the main menu. Next, add and configure applications not included in the default ISO.

Finally, run the Refracta Snapshot tool to create a bootable live session system. This gives you the best of both worlds.

You also can use the USB installation to deploy your personalized ExTix Linux to whatever computers you want. This same approach is available with the other three ExTix editions.

The only difference is the look and feel options of the separate desktops and the default applications. Remember, each of these editions is built around some customization.

Another plus that comes with running ExTix 19.10 is access by default to Nvidia’s proprietary graphics driver 430.50, which is preinstalled. It will be used automatically if your computer has support for it. 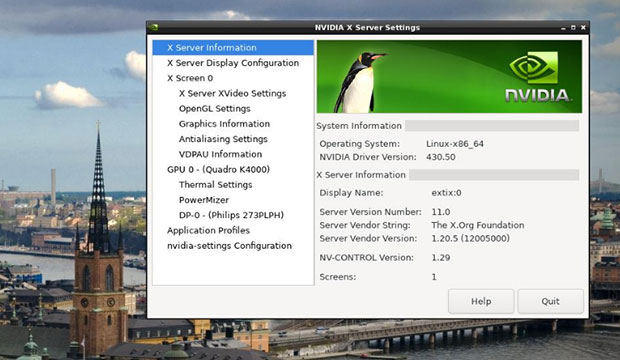 A bonus with ExTix 19.10 is automatic access by default to Nvidia’s proprietary graphics driver.

I said early on in this review that ExTix leaves you wanting more but settling for less. Take my assessment as a description, not a harsh criticism.

Out-of-the-box, you might find Extix Linux to be a bit lacking in default applications. The bundled application do not include any office packages such as LibreOffice. Games and multimedia players are sorely absent.

So are most of the typical applications you would expect to find in Linux distros running any of the offered desktops. The LXQt release from last summer had noticeably more bundled applications, including an office suite.

You have to make up for these omissions by downloading and installing what you need. ExTix does not maintain its own software store. Synaptic Package Manager is available, however, as the go-to tool for adding and removing applications.

You will find some strangeness in the installation procedures and the added steps to creating persistence for the only real running option — live session environments. Just follow the installation tweaking instructions posted on the ExTix website.

I much prefer the Calamares installer that was previously available in ExTix. The Refracta Installation tool is not as forgiving or as flexible with installation options.

You can pop in the bootable DVD to run the plain vanilla live session that is ExTix 19.10, but the limitations in this current release dampen your ability to use ExTix as a personalized pocket Linux.

Keep in mind that for the Refracta installation tools to work, you either must install Grub or edit the existing Grub configuration file on the host computer into which you will insert the live USB stick. This eliminates the ability to have an updated pocket distro that you can plug into any computer.

Another oddity is the live session login. It is automatic. That can pose a security risk.

You do not have to supply a password. It is easy to run the live session in system RAM without having to type special commands in an edit window when the DVD initially loads. Just select boot alternative four (Load to RAM).

You can remove the DVD or USB stick once the system loads. This makes it convenient to access your documents while running in Live session without creating persistence.

One of my major disappointments with ExTix is its inability to have an always-on Internet connection. I was unpleasantly surprised to discover that the ISO live session does not automatically connect to the host computer’s LAN connection.

I would expect that result on laptops without a compatible WiFi driver, and I almost never fail to have a connection when I run a VM session, which almost always piggybacks the host computer’s connectivity.

My experience with ExTix is the reverse of that scenario. My desktop computers universally had no automatic LAN connection, but even my finicky laptops registered available WiFi connections.

My efforts to manually add a LAN connection failed. Editing and creating LAN connections usually is fairly routine. Not so, it appears, when using ExTix 19.10. 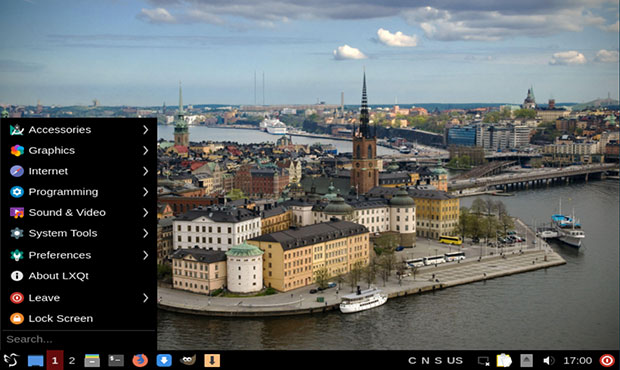 Extix Linux 19.10 is missing some standard applications and an easy Internet connection.

ExTix Linux is an unusual distro. One of its most compelling attractions is also one of its unusual design traits. It is a fully functional Linux platform that runs in a live session state.

ExTix has much flexibility to offer, but it takes some setup and tinkering to get it working to full potential.

Want to Suggest a Review?

Is there a Linux software application or distro you’d like to suggest for review? Something you love or would like to get to know?

Please
email your ideas to me, and I’ll consider them for a future Linux Picks and Pans column.

And use the Reader Comments feature below to provide your input!

Jack M. Germain has been an ECT News Network reporter since 2003. His main areas of focus are enterprise IT, Linux and open source technologies. He has written numerous reviews of Linux distros and other open source software.
Email Jack.