When an oxygen tank exploded during the Apollo 13 mission to land on the moon, NASA quickly formed what it later called a “tiger” team — a small group of specialists with different areas of expertise to investigate the issue and figure out how to get the four astronauts home. Their work guided the actions of the flight crew to turn a major crisis into a shining moment in the history of the U.S. space program.

Tiger teams fulfill a crucial risk management function, but they aren’t enough to fully protect organizations from experiencing negative financial, operational or reputational outcomes due to adverse events, such as a natural disaster, major security hack or global pandemic. That’s because the skills needed to predict and educate about adverse events are different from the skills needed in a moment of crisis.

The tiger team takes a first pass to identify procedures, and the SWAT team assesses their feasibility and recommends adjustments

“Anticipating adverse events is a qualitatively different task than responding to adverse impacts when they occur,” says Christie Struckman, VP Analyst, Gartner. “Many organizations use the same individuals in both scenarios, but not all team members are best suited for both situations.”

Instead of one team to fulfill all aspects of adverse event prediction and response, there should be two: A tiger team to anticipate and educate, and a SWAT team — derived from the “special weapons and tactics” units from military and police forces — to handle on-the-ground actions in crisis situations.

Tiger vs. SWAT: Who does what?

Different teams lead during different phases. For example, tiger teams lead the process of identifying possible adverse events and educating the organization, prioritizing which events to plan for and documenting the response. SWAT teams, for their part, lead the event response.

The two teams collaborate on planning: The tiger team takes a first pass to identify procedures, and the SWAT team assesses their feasibility and recommends adjustments. And both teams particulate in evaluating the results after the fact and looking for ways to improve.

Both tiger and SWAT teams need people with concrete skills and competencies. Less concrete are the various ways of thinking — also known as cognitive styles — that are critical to meeting the needs of a tiger or a SWAT team. 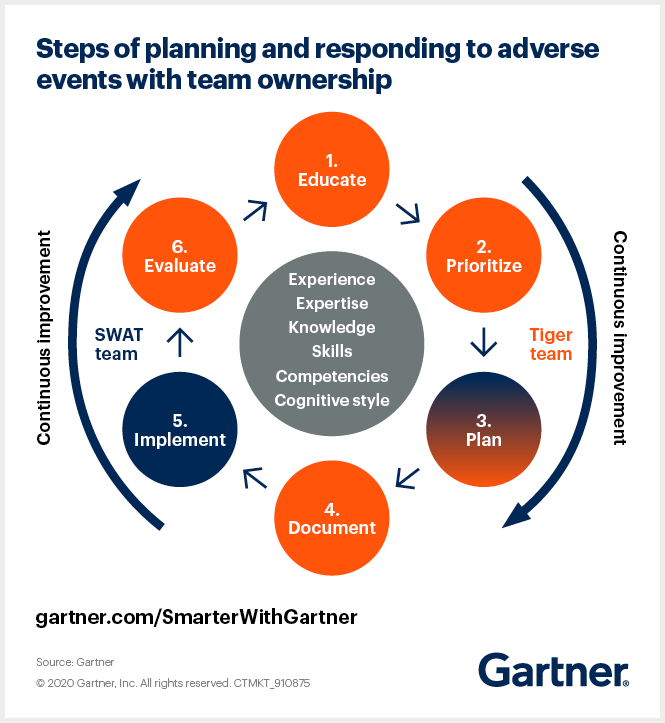 For example, people who tend to wait until they have all the relevant information before making a decision are well-suited to the methodical, research-driven work of a tiger team. People who are willing to act on limited knowledge, on the other hand, are essential SWAT team members. The former have a low tolerance for ambiguity; the latter, high.

Leaders can assess five cognitive dimensions in their tiger and SWAT team candidates to determine their cognitive style and create balanced teams. For each dimension, a person’s style falls on a continuum between two poles. The dimensions and their poles are:

As with tolerance for ambiguity, the work of tiger and SWAT teams in many cases aligns with certain cognitive styles. People who automatically question and reframe problems are excellent tiger team members, skilled at identifying possible adverse events. The middle of a crisis is not the time to completely rethink a plan, however, so improvers make better SWAT members.

Yet staffing teams is not a binary exercise of placing people with one style on the tiger team and another on the SWAT team. “The most effective teams have a balance of cognitive styles,” says Struckman.

The post Create the Right Type of Crisis Management Team appeared first on Smarter With Gartner.